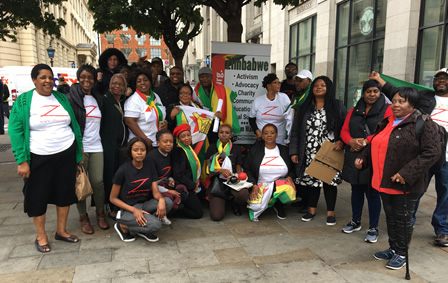 The peaceful gathering was in fullness this Wednesday 11 October, with numbers swelling since launch.

The protesters chanted “Mugabe must go” calling for the end of Mugabe era, they also penned their own words to a “new” National Anthem. More to follow on that in future weeks.

All the activists held up banners reading “Mugabe must go” and - "Mugabe's Madhouse - illegally in Government" - as they have rigged so many elections - they do not have a legitimate mandate to Govern, no matter what Mugabe parrots to his acolytes. Said one of the protest leaders.

The songs and singing today were so inspirational that passers-by were dancing with the protesters taking videos and pictures. The gathering drew attention of the passing motorists as well; cars and vans were honking their horns and many were videoing as the protesters in full song hoisted their Zimbabwe flags and placards.

The emergence of a Mugabe’s “new cabinet” that has seen the former finance minister being demoted to one of three media ministries has prompted many to question the competence of this government, yet again.

Mugabe has appointed Patrick Chinamasa as a Minister of Cyber Security, Threat detection and Mitigation, perhaps he realises that the internet is assisting on this transition to democracy.

Reportedly Mugabe has said he “wants to nail those who do “”mischief”” – a thinly veiled threat of further imprisonment and perhaps torture in the run up to the 2018 elections. Indeed, Stendrick Zvorwadza had been detained on the pretext of “undermining the “Authority” of the President” – whatever that means.

To further ‘undermine’ the illegal Government, this Wednesday’s Vigil was aired live on Facebook and WhatsApp groups globally. The recent appointment, or rather, the demotion of Patrick Chinamasa and the arrests of cyber journalists points to the effect that mobile phones and the internet is having. Thus, The internet has been viewed as having the potential to expose and rally Zimbabwean communities against the corruption and mismanagement of the economy and of national resources.

Indeed, the internet is becoming an established system of political communication and the diaspora intend to make full use of it. It is a medium through which the diaspora can promote genuine democracy by providing genuine news that is otherwise stifled, and now it would seem to be censored, at home.

ZHRO Chairperson, Chipo Parireranyatwa said that the Wednesday Vigil aired through these channels has the capacity to become an instrument of progressive political change, giving voice to the voiceless Zimbabweans.

The Wednesday Vigil coordinators, Philip Mahlahla, Sarah Bayisai and Roselyn Mukucha thanked the protesters who braved the worsening weather to come out and campaign against the clueless regime.

4 new members joined ZHRO today and others additionally, through their Facebook page. The Embassy shut (again) but no police called in this week. They might have been called but decided there was no need to attend a peaceful demonstration in the UK – but we cannot begin to comprehend what violence would have befallen on the protesters had they done so in Harare.

Also in the News this week the UK Home Office has been found wanting in their discriminatory treatment of the detention of Asylum seekers who have been the victims of Torture. Their narrow view of what constituted Torture was rejected by Mr Justice Ouseley who “ruled that aspects of a Home Office policy introduced in September 2016 known as “Adults At Risk” wrongly allowed many who had been tortured overseas to be imprisoned”.

We also note the 15th anniversary of the Saturday Vigil and look forward to the return of the spirit of unity that it once held in high esteem.

ZHRO is working hard to expose those here in the diaspora who feel more comfortable exploiting Zimbabweans rather than helping them. We are reminded of the headline “Sex and Greed ruin activism in the UK”, from earlier this year. ZHRO has laid the foundations to expose the exploiters and prevent this Zanu PF tactic from doing any more harm to the real Zimbabwean Community.